This lesson can be used or adapted by other educators for educational purposes with attribution to Lepage. None of this material may be used for commercial purposes. Copyright of original artworks belongs to the artist. Reproduced with permission from the artist. Please contact Andrea Lepage for information the Teaching with UCAH Project: lepagea@wlu.edu or (540) 458-8305. Toolkit Lesson for “University Collections Research Assignment” by Andrea Lepage is licensed under a Creative Commons Attribution-NonCommercial-ShareAlike 4.0 International License.

Introduction to the Toolkit Lesson:

Many colleges across the country possess small but rich art collections that have the potential to expand curricula in dynamic ways across a range of subjects. Such collections often hang on the walls of offices, public buildings, or are hidden away in storage. This toolkit lesson helps professors to harnesses the expertise and enthusiasm of many students from across campus to develop content for the university’s art collection. The “University Collections Research Assignment” Toolkit provides a series of step-by-step directions to engage students with artworks held in a university’s collection. The Toolkit also provides instructions for recording information for archival purposes and facilitating active student participation in collection development.

Students enrolled in my Arts of Modern Latin America course studied Washington and Lee University’s small collection of Latin American and U.S. Latina/o artworks. The assignment can be adapted to study any collection of university artworks or objects. This museum studies assignment aims to: 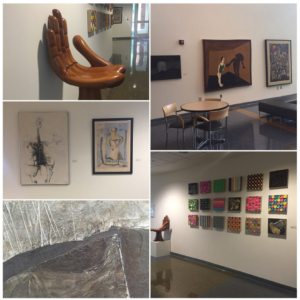 “[The Washington and Lee University collection of Latin American and U.S. Latina/o art] features works by artists from Chile, Nicaragua, Costa Rica, Argentina, Mexico and the United States representing a variety of art movements that fall under the umbrella of modernism and postmodernism. Half of the pieces in this exhibition come from the university’s Weinstein collection started by Dr. Jacob Joseph Weinstein and his wife Bernice Weinstein, who were deeply interested in Latin American art. The Weinsteins were the owners of the Jacob’s Ladder Gallery in Washington DC and parents of Michael Seth Weinstein who attended Washington and Lee in the 1970s. This collection also includes the work of Albert Contreras, a Latino artist based in California who donated a series of rectangular acrylic gel paintings to the University in 2005. Together, these works provide a broad overview of Latin American art and offer a glimpse into the art collection of Washington and Lee.” -Student curators/UCAH Summer Interns (Ellie Gorman ‘17, Caroline Holloway ‘18, Ailyn Kelly 18)

Project Introduction: During the term, students have the opportunity to study Washington and Lee University’s small collection of world-class Latin American and U.S. Latina/o artworks. Thanks to the work of The University Collection of Art and Art History (UCAH) staff and interns, these works are exhibited together for the first time. The exhibition is located right outside our classroom in the Wilson Hall atrium. You have to rare opportunity to study high-quality Latin American works in person. Most importantly, this assignment will allow you to make a substantial contribution to our knowledge of the university’s art collection–most of these works haven’t been studied in the past. Your work will become a permanent part of the University’s collections management database and object information file.

Part 2. Read the object file and conduct research. Some object files are more extensive than others. Don’t worry if your file doesn’t include lots of information—this simply means that your contribution to our knowledge of the university collection will be all the more important. As you conduct research you might answer some of the following questions to get started:

Part 3. Fill in the basic factual details on Object Information Worksheet. You’ll find the artist’s name, the title of the artwork, the date that the work was created, classification, material, size, and the accession number on the existing label or in the object file. Look up the artist’s birthplace, and year of birth and death. Write a concise 75-word biography of the artist using information from the file and the contents of your research. Keep track of all of your sources and list them in the ‘Citations’ section of the form. Add related sources to the ‘Bibliography for Further Study’ section. All citations should be formatted properly according to the Chicago Manual of Style.

Part 5. Create your meta-data / search terms. Attaching standardized meta-data to your object helps others to find it using Web searches. You will add five to ten search terms to the Object Information Worksheet. The terms will situate your object historically and art historically and indicate that you know about the artist as well as subject matter. Use standard Library of Congress Subject Headings.

Part 6. Write your Object Label (150 words maximum). You have now amassed a great deal of information about your object of study. You’ll need to sift through the information to craft a short label that will present your artwork to the general public. Consult the ‘Writing Effective Wall Labels’ handout for additional information.

Research suggests that museum-goers spend very little time examining artworks or reading wall labels. Viewers spend about ten seconds looking at each artwork–about seven of those seconds are spend reading the label. An effective label can help to direct close looking and sustain viewer attention. In Gail Greg’s ARTNews piece, “Your Labels Make me Feel Stupid,” she suggests that viewers stand in front of artwork with a few VERY basic questions in mind:

Your task will be find a balance between addressing these basic questions and presenting interesting and well-substantiated information to the viewer.

Part 7. The “education department” edits your Object Label. We’ll assume the role of a museum education department and edit wall labels to ensure that label clarity and suitability for our target audience. Each student will edit two labels. Students will incorporate edits into the final draft of the Object Information Worksheet. 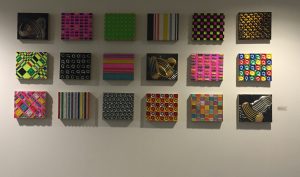 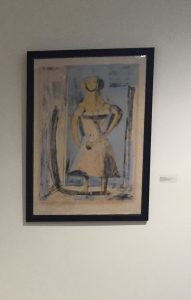