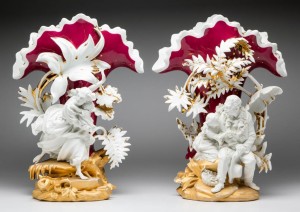 “There is no arguing with pictures and everybody is impressed with them, whether they mean to be or not.” -Harriet Beecher Stowe

Details of Artwork from UCAH

This pair of vases was made in Limoges, France, and are decorated with figures from Harriet Beecher Stowe’s Uncle Tom’s Cabin (1852).  Limoges was the center for porcelain production in nineteenth century France and this type of porcelain was a popular item for the home in America during the same time period. The vases were purchased by UCAH with funds provided by W. Groke Mickey.

The vases were possibly decorated in New York, New York, about 1860. They were made of hard-paste porcelain which is a combination of kaolin clay and petuntse rock (Clarke).  The vases are decorated with vignettes of two seminal moments in the novel; Little Eva hanging flowers around Uncle Tom and Eliza fleeing over the ice with her son Harry. Their large size, approximately 19 inches in height, and elaborate decoration suggest that they were expensive and meant for a grand interior. It may be argued that they are the physical manifestation of the main-streaming of anti-slavery sentiments among much of the United States.

The vases are examples of the rococo revival style popular in the 1850s and 1860s, and they are painted in the   color solferino, which is a purple-red color. According to the Oxford English Dictionary, solferino is a dye from Italy which was discovered around 1859. Mary Todd Lincoln chose solferino for the state dinner service she commissioned for the White House in 1861. This article from the New York Daily Tribune details the White House china purchase.

The Novel & Its Influence

Published in 1852, Uncle Tom’s Cabin was the second best-selling book of the century, after the Bible. The novel is often credited with changing the nation’s perception and opinion of slavery.  Mythology around this book includes the story that Abraham Lincoln supposedly described Stowe as “the little lady who started this great war” (Weinstein 1). The popularity of the book spawned a wide range of images, theatrical productions, and objects based on the book throughout the nineteenth century and beyond. As a December 23, 1852 article in the abolitionist newspaper The Liberator reported;

“It should be noted, among the favorable signs of the times, that artists, of all grades, now find it not only a congenial, but a remunerative work, to represent the creations of Mrs. Stowe’s genius in pictures and statues. The people of Boston, and of large towns generally, have long been accustomed to see Uncle Toms, Eves and Topsys without number, in engravings of various degrees of merit and price. Lately, they have been in oil colors, by Baxter, or some of his imitators; and now I find not only large engraved heads, in the finest style of Parisian mezzotint, one of Uncle Tom life-size, and another of Eva and Topsy, but a group in real bronze, showing Eva putting the wreath of jasmines around Tom’s neck, and separate statuettes of George Harris, and Eliza and her child. I infer,  from seeing these elegant and expensive works in the shop windows with Paul and Virginia, Little Nell, and Undine, not only that the general heart of humanity has been touched by them as by their predecessors, but that they have an established market value, and that people of wealth and taste now begin to seek such works as the ornaments of their parlors and chambers -C.K.W.”

The book was extremely popular in America and abroad and had profound effects; in the 1926 edition of Uncle Tom’s Cabin, Francis Pendleton Gaines states in his introduction, “Within a year, according to Mrs. Stowe, 300,000 copies were sold [in the U.S], resulting in profits to her greater than had accrued to any American from a book” (Stowe x).  “By 1857, the book had been translated into 20 different languages, and sold more than two million copies worldwide.”  (Uncle Tom’s Cabin: A 19th-Century Bestseller). “In Scotland an emancipation fund of a thousand pounds was raised by penny subscriptions” (Stowe x).  In Russia (Stowe x) and Siam slave holders freed slaves because they were so moved by the novel (Stowe x; Warner 320).  The novel was even the subject of a U.S. Supreme Court case.  In 1853, Stowe sued F.W. Thomas who had translated the novel into German and sold it in the U.S. without the author’s permission.  The court ruled that Thomas had not violated Stowe’s copyright because the translation could not be considered the same work (Copyright Timeline: A History of Copyright in the United States).  This principle is still upheld in copyright law today.

Toolkit Lesson: TEACHING FROM THE PERSPECTIVE OF HISTORY

As background read pages 75-79 of the 2003 article by Kathleen Hulser, “Reading Uncle Tom’s Image: From Anti-Slavery Hero to Racial Insult,” in volume 65 issue 1 of The New York Journal of American History.

Illustrations shape how we see the text of a novel. Imagery can serve as a “representation for ideology” (Fee 37).  The meaning of images may shift over time along with the social norms of the day.  Compare these vases to images presented in various editions of the text, which can be found at Stephen Railton’s Uncle Tom’s Cabin and American Culture website hosted by the University of Virginia (UVA).

“Copyright Timeline: a History of Copyright in the United States.” Association of Research Libraries.  4 May 2016. Web.