Created by Alston Cobourn and Elizabeth Teaff with Andrea Lepage

In the 1960s, Robert Indiana (b. 1928) combined words and images at a time when his contemporaries kept separate these visual elements. Often referred to as a pop artist, art historian Susan Ryan argues that Indiana has more in common with his peer, the hard-edged painter/printmaker Ellsworth Kelly who specialized in color field painting (Ryan 3). Indiana’s work incorporates numbers, words, symbols, and bold color to create “allegories of triumph and timelessness or failure and loss.” (Ryan 4)

Provenance (history of ownership) of Artwork

The Indiana portfolio is one of 25 portfolios of artist’s proofs Robert Indiana retained for himself in 1971 upon publication of an edition of 200. The UCAH holding consists of 10 screenprints (serigraphs) in color produced in 1971 on white Schoellers Parole paper. Each piece is signed, dated, numbered III/XXV and inscribed “for Lowell” in pencil on bottom edge. Indiana gave the portfolio to artist Lowell Nesbitt and signed each print and included the inscription, “for Lowell.” In 1981, Nesbitt gave the portfolio as a gift to Washington and Lee University in honor of Dr. and Mrs. Jacob Weinstein of Washington D.C.

Washington and Lee University’s collection of prints, housed in various locations across campus, is comprised of 10 prints. This complete set represents copies of his major paintings from the 1960s that Indiana packaged in black linen portfolio cases (overall portfolio (box): H 39.75” x W 32.75” x D 2” (U1981.4.4.1-.10). The portfolio was printed by Edition Domberger, Stuttgart, and published by Multiples, Inc., New York. Individual works have been removed from the original cloth-covered portfolio box and framed.

The original paintings were influenced by national events. In addition to historical events, Indiana’s work often references his own childhood and can be seen as autobiographical (Ryan 4). Subjects range from art history and literature to the Civil Rights Movement and the Vietnam War. In the 1960s, Indiana achieved worldwide acclaim for his iconic image of the word “LOVE,” which he incorporated into many of his paintings, sculptures and silkscreen prints.

Toolkit Lesson One:
Teaching from the Perspective of History using The Calumet & The Confederacy: Mississippi 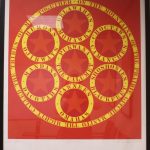 “. . . Calumet is a town in Indiana in relation to Chicago and I was struck by that coincidence…then I went into heroics and The Calumet is a heroic painting. It isn’t about geography, it’s about Longfellow and the Hiawatha and the continent’s first citizens and again a great tragedy.”

The Calumet incorporates Longfellow’s poetry, the plight of Native Americans, and the vanishing wilderness.   An edited version of the opening lines from Henry Wadsworth Longfellow’s The Song of Hiawatha (1855) encircles Indiana’s composition, reading, “On the mountains of the prairie Gitche Manito the Mighty called the tribes of men together.”

On the Mountains of the Prairie,
On the great Red Pipe-stone Quarry,
Gitche Manito, the mighty,
He the Master of Life, descending,
On the red crags of the quarry
Stood erect, and called the nations,
Called the tribes of men together.

The text, in the artwork, binds together a series of circles, each bearing the names of two Native American nations: Hurons – Ojibways, Delawares – Mokawks, Choctaws – Camanches, Shoshoniew – Blackfeet, Pawnees – Omahas, Mandans – Dacotahs, Pukwana – The Calumet. Indiana draws the particular tribal pairings for the first six circles directly from Longfellow’s poem. The passage refers to the moment in Longfellow’s romantic poem in which Gitche Manito calls together various nations to give up their past feuds, “wash the warpaint from their faces” and come together in peace. Read Longfellow’s poem in its entirety.

[View the print of The Confederacy: Mississippi in UCAH’s collection or find it on Indiana’s website]

Confederacy: Mississippi is a print from a series of paintings that Indiana created to highlight the violence inflicted on members of the Civil Rights Movement in America.

Indiana was a storyteller and poet. He used his canvases to create statements about the myth of the American Dream (Ryan 3) and its limited accessibility to all Americans, especially those of color. In The Confederacy series, Indiana paired text and image to create a graphic representation of the states that ceded from the Union during the Civil War (1861-1865). The Confederacy: Mississippi, for example, is described by the encircling text, which provides a cutting critique of state: “Just as in the anatomy of man, every nation must have its hind part.” The image in the center of the piece links the past to present: Indiana identified the city of Philadelphia, Mississippi prominently at the center of the state of Mississippi. In 1964, just two years before Indiana created the original Confederacy series, three civil rights activists—one black and two Jewish—were murdered in Philadelphia by members of the Ku Klux Klan. High-ranking city officials, including deputy sheriff Cecil Ray Price, were counted among over 10,000 Klansmen who populated twenty-nine KKK chapters in the state. The murders of were subsequently covered-up by these high-ranking officials obstructed justice by disposing of the bodies of activists Michael Schwerner, James Chaney, Andrew Goodman and covering up the crime. (For further reading, see Douglas Linder’s essay, “Bending Toward Justice: John Doar and the Mississippi Burning Trial.”)

Engage more deeply with this piece: 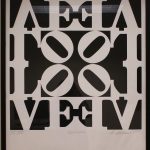 Robert Indiana’s LOVE pieces are among his most iconic works. Part of the explanation for the celebrity of the piece is due to the fact that it was improperly copyrighted by Indiana. As such, the iconic interlocking letter design was reused by other artists and companies throughout the world without Indiana’s permission. When Indiana created this work he did not include a copyright symbol, which was required for a creator to retain copyright at that time. This image has been made into jewelry and paperweights (Ryan 220).

Current copyright law in the United States dictates that a creative work be fixed in a tangible medium, such as a poem written on a napkin or sent via email.

Signs From The Sixties: Robert Indiana’s Decade At The Currier Museum Of Art. artdaily.org

Washington and Lee University: Copyright in the Digital Age FAQ