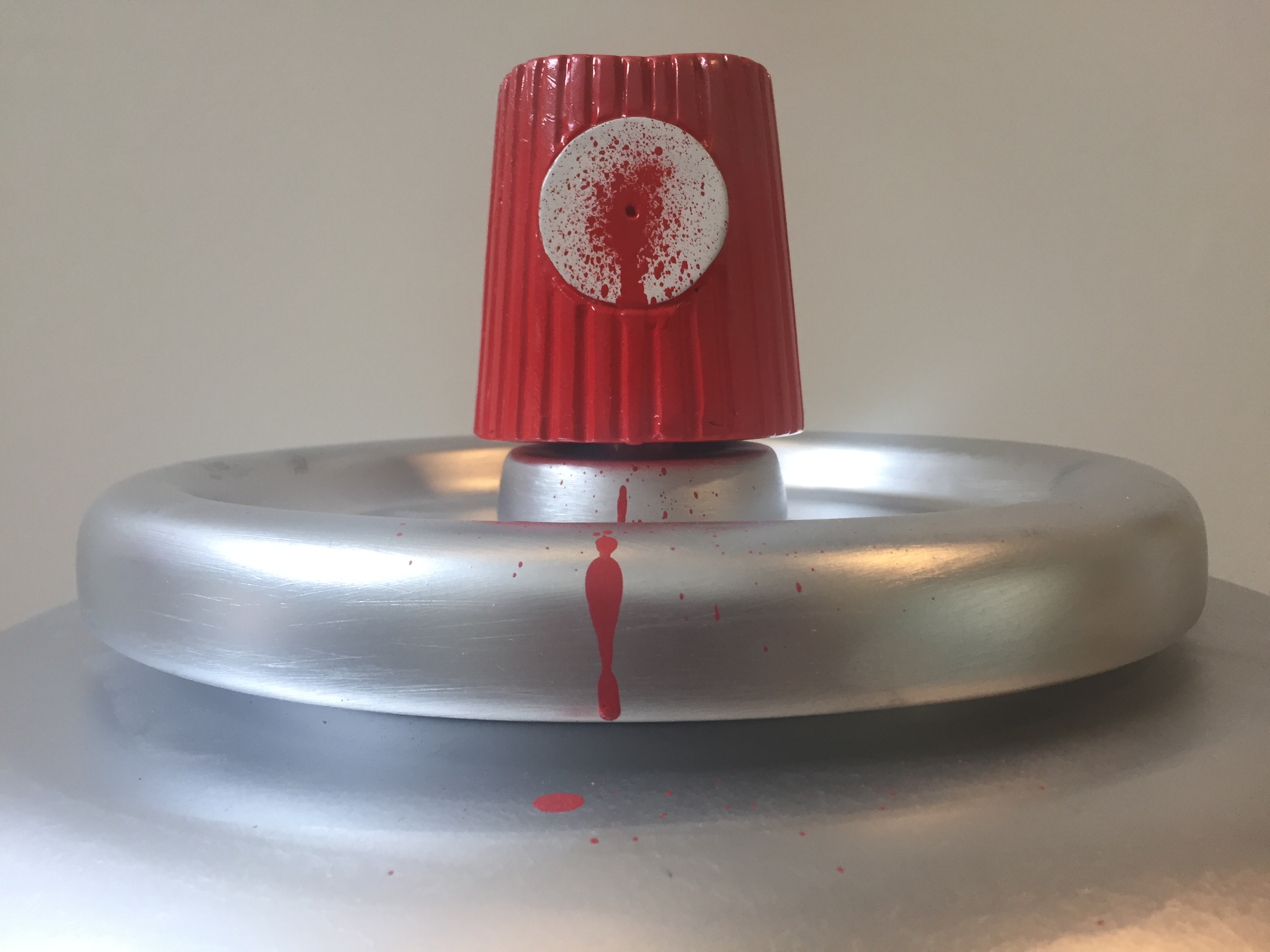 Contemporary art can be challenging to approach–and sometimes even to identify–because it cannot be defined by any one cohesive movement, material or message. Scholars commonly define contemporary art as any artwork created by living artists. Contemporary art thus reflects our contemporary world, which is extraordinarily diverse, globally oriented, and technologically advanced. Artists working today respond to these complex cultural conditions with creations that are often realized in non-traditional media or unexpected contexts. By presenting work that invites a range of interpretations, contemporary artists open up opportunities for dialogue that can lead to a deeper engagement with the ideas they are addressing.

Through a close examination of Mr. Brainwash’s contemporary sculpture, the purpose of this toolkit is to facilitate a lesson that:

Thierry’s huge success and arrival in the art world. I mean, maybe Thierry was a genius all along. Maybe he got a bit lucky. Maybe it means art is a bit of a joke. If Thierry can pull it off, then amazing, but, you know, it’s kind of… I think… I think the joke is on… I don’t know who the joke’s on, really. I don’t even know if there is a joke. I don’t think Thierry played by the rules, in some ways, but then, there aren’t supposed to be any rules, so I don’t really know what the moral is.

Street Art, Banksy, and the Creation of Mr. Brainwash

Mr. Brainwash (or MBW) is the name used by French-born artist Thierry Guetta whose work is a mash-up of styles that he calls “Street Pop.” Guetta is known for manipulating appropriated images with screen prints and stencils to create work that is heavily influenced by street and graffiti art. Juxtaposing iconic historical imagery with references to contemporary pop culture and working in a variety of art markets and venues (commercial galleries; public art; and music, design and fashion collaborations) Guetta defies easy categorization.

Guetta first came to prominence as the subject of the 2010 documentary Exit Through the Gift Shop. The film was directed by the semi-anonymous street artist Banksy who has built an international reputation on social commentary in the form of subversive stunts such as covertly installing his own work in major museums. Exit Through the Gift Shop follows Guetta’s meteoric rise from used clothing dealer and amateur videographer to art world sensation. Through his cousin, the Parisian artist known as Space Invader, Guetta is introduced to street art and attempts to infiltrate the underground scene using his video camera to record the artists and their illicit practice. His obsession leads him to encounters with legendary street artists Shepard Fairey and Banksy, who invite Guetta to turn his videos into a documentary film.

It soon becomes clear that he does not have the patience to turn his footage into anything watchable. 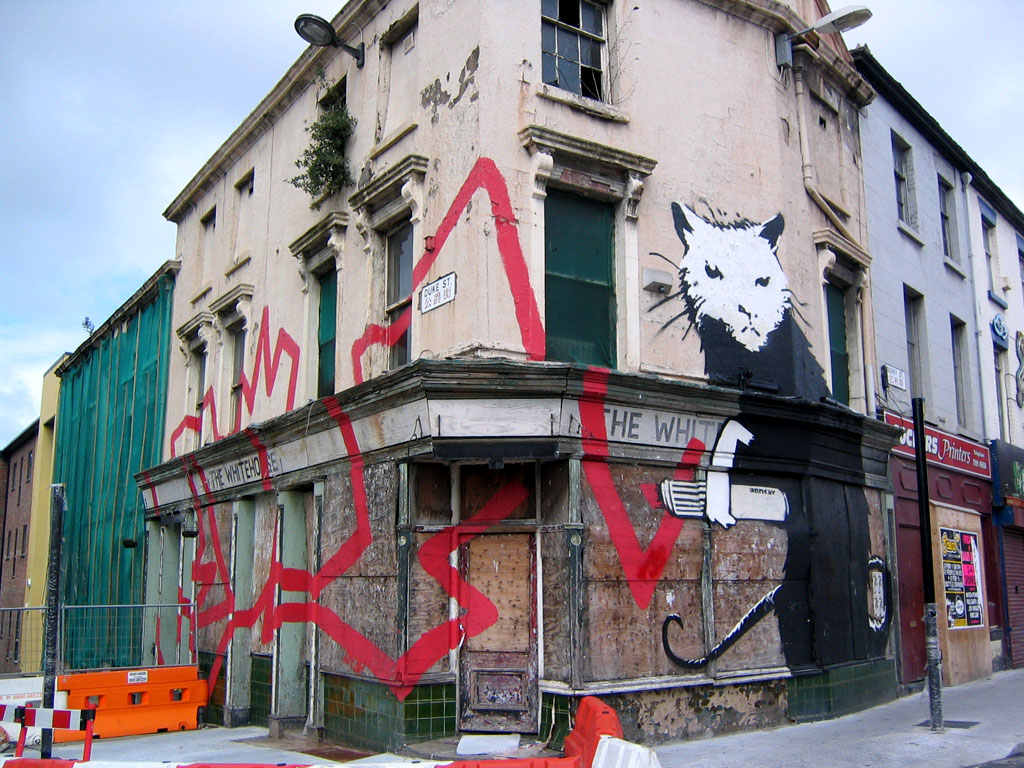 Banksy (?), photograph by Klara, May 4, 2008. Used under a Creative Common Attribution-NonCommercial-NoDerivs 2.0 Generic License. 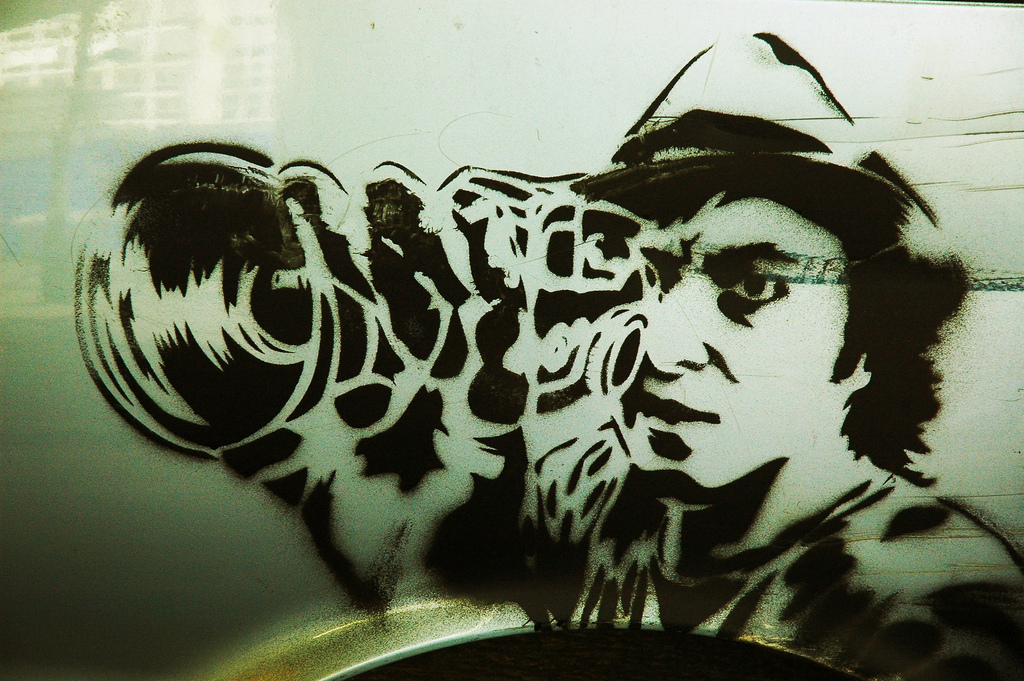 Banksy, seemingly in an attempt to rid himself of Guetta’s persistent lens, suggests Guetta explore other avenues of creativity. Inspired by Banksy’s encouragement, Guetta reinvents himself as the street artist Mr. Brainwash and plasters the Los Angeles area with his tag—an image of himself holding a video camera and wearing his signature fedora hat.

Soon, he is planning an elaborate exhibition and employs a team of assistants and designers to create, under his direction, hundreds of paintings, prints, and sculptures that he presented in a cavernous, abandoned television studio. Guetta’s energetic promotion and distribution of endorsements from Banksy and Fairey created a media hype that resulted in over $1 million in sales in the opening week. Since his 2008 debut exhibition, Mr. Brainwash’s career exploded with more shows and commissions by Madonna, Michael Jackson, Mercedes-Benz, the Hard Rock Hotel, and Sun Glasses Hut, among others.

There are theories that Exit Through the Gift Shop is an elaborate hoax masterminded by Banksy to comment on the commercialization of street art. Banksy (and everyone involved in the film) denies these rumors, though proponents of the idea note that the central themes in the film (judging art talent, commodifying subculture, style over substance, art and authenticity) all echo themes that run through his work.

This sculpture references the famous Pop artist Andy Warhol who created arguably the most iconic works of contemporary art with his series of prints of Campbell Soup cans. In the early 1960s, Warhol, trained as a commercial artist, was at the vanguard of the Pop art movement, which blurred the line between “high” and “low” art. Warhol’s method of screen-printing 32 Campbell Soup Cans complicated this distinction by removing the artist’s hand from the creation process to create “fine” art. Mr. Brainwash’s sculpture uses the same color scheme and design as the famous Campbell Soup can but is reshaped as a spray can, alluding to the graffiti artist’s primary medium; it is an appropriated image of an appropriated image. Through his practice of hiring assistants to create his art work, Mr. Brainwash also references Andy Warhol’s methods of mass-production to make his artwork. 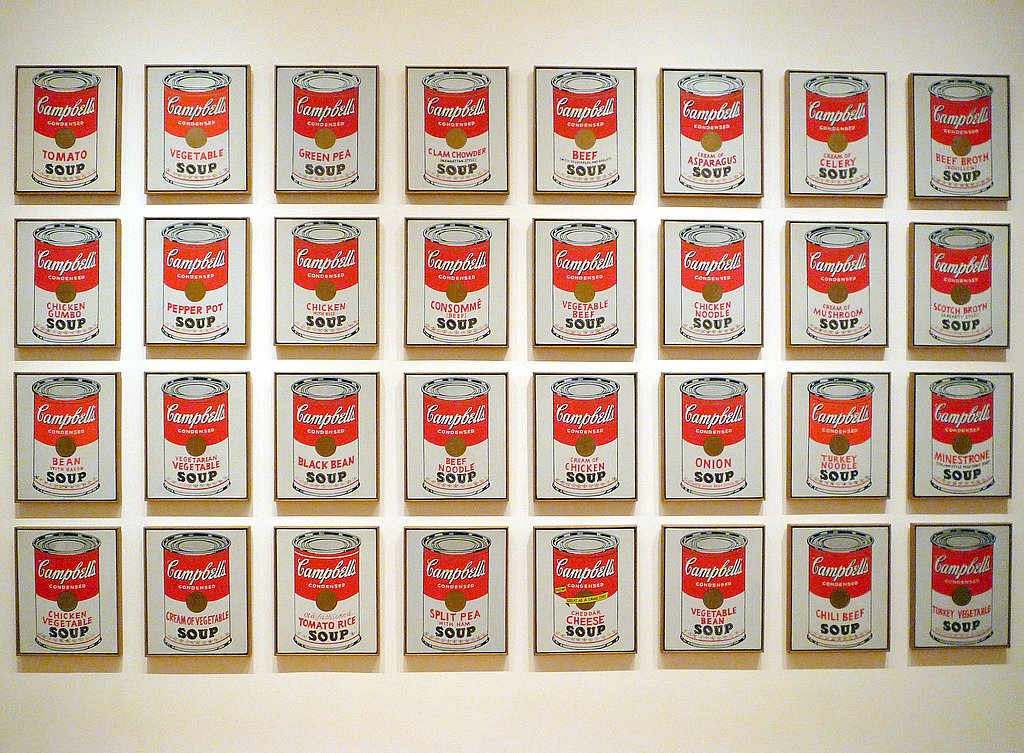 Most artists take years to develop their style, Thierry seemed to miss out on all those bits.

Exit Through the Gift Shop

“I do think that the whole phenomenon of Thierry’s obsession with street art, becoming a street artist, a lot of suckers buying into his show and him selling a lot of expensive art very quickly, it’s… anthropologically, sociologically, it’s a fascinating thing to observe, and maybe there’s some things to be learned from it.”

Exit Through the Gift Shop

Pre-Discussion: Before viewing Tomato Spray Can, a general discussion about defining art is encouraged. The purpose of this strategy is for students to attempt to articulate their understanding of and experience with art without conforming to the piece under discussion.

Other Artists and Relevant Artworks:

This lesson was created by Clover Archer, director of the Staniar Gallery at Washington and Lee University in Lexington, Virginia. This lesson can be used or adapted by other educators for educational purposes with attribution to Archer. None of this material may be used for commercial purposes. Copyright of original artworks belongs to the artist. Please contact Andrea Lepage for information about the lesson or the Teaching with UCAH Project: lepagea@wlu.edu or (540) 458-8305.